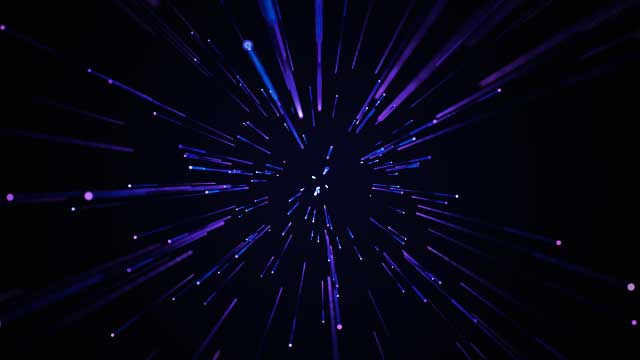 Many are confused about the so-called ”God Particle,” the Higgs Boson. They think scientists have finally found a naturalistic explanation for the origin of the universe. That is not the case.

The Higgs mechanism does not miraculously create mass out of nothing.

Rather, the mass is transferred to the particle from the Higgs field, which contained this mass in the form of energy. Thus, the Higgs mechanism does not account for the origin of mass in the ultimate sense… So the possible discovery of the Higgs boson falls under operational science, not origins science” (Dr. Jake Hebert and Dr. Jason Lisle, ”Have Scientists Found the ‘God’ Particle?”).

Einstein confirmed that space and time are just as physical as matter. That’s why space and time can be altered by gravity, and space produces particles. Space actually is something not nothing! Space can be stretched and manipulated. Einstein’s equations shows that space, mass, and time are all various forms of energy. Einstein showed that the universe couldn’t be eternal. It had a beginning. Einstein believed, because of science, in the existence of God behind the origin and order of the universe. He didn’t believe in a personal God, but he did believe science pointed to the existence of an all-powerful and intelligent Creator.

Einstein said that the First and Second Laws of Thermodynamics in science would never be overthrown. Both laws control everything in science and point to a supernatural Creator.

The First Law of Thermodynamics teaches that mass/energy cannot come into existence from nothing or be destroyed into nothing by any natural process, and the Second Law of Thermodynamics teaches that, over time, all energy in the universe is irreversibly decaying (becoming more and more useless) until the universe becomes total chaos and useless energy, where no work of any kind can be accomplished. The energy itself isn’t destroyed. It just becomes useless to do any work.

If the universe were eternal then all the energy in the universe would have become totally useless by now, and I wouldn’t be writing this article and neither would you be reading it. The fact that we haven’t reached that stage is evidence that the universe had a beginning and that beginning had to be supernatural since, according to the First Law of Thermodynamics in science, natural laws and forces cannot bring mass/energy into existence from nothing.

But, isn’t the Second Law of Thermodynamics merely an expression of probability? Yes, but the probability is so high and certain that the odds of just one calorie of energy spontaneously defying the Second Law of Thermodynamics would be trillions times trillions to one, and the universe is made up of far more than just one calorie of energy!

The natural tendency of matter is towards greater disorder and chaos, not towards greater order and complexity. The natural tendency of matter is to breakdown, not build-up. The only way that this tendency can be overcome, temporarily, as is the case when a seed becomes a tree, is if there already exists something to convert and direct energy towards greater complexity. A seed contains the energy converting mechanisms and genetic code to direct the development and growth of a tree. It’s not enough just to have useful energy for greater order and complexity to develop. There also has to be an energy converting and directing mechanism.

Natural laws may be adequate to explain how the order in the universe operates and functions, but mere undirected natural laws cannot explain the origin of that order. Once you have a complete and living cell, for example, then the genetic code and mechanisms exist to direct the formation of more cells, but how could the cell have naturally originated when no directing code and mechanisms existed in nature?

We have to look to an intelligent Cause outside of nature for life’s origin. God was the first Genetic Engineer!

Only a minimal level of order is possible spontaneously (by chance). For example, amino acids can form by chance but not proteins, DNA, and RNA. The individual molecules forming proteins, DNA, and RNA require for them to be in a precise sequence, just like the letters in a sentence. This is not something that mere undirected laws of physics and chemistry can accomplish. What about natural selection?

Modern atheistic scientists (i.e. Stephen Hawking) realize that the universe cannot be eternal and that it requires a beginning, but they believe the beginning of the universe was from nothing by some natural process that is yet to be discovered. Their faith is futile according to Einstein. Also, to say that nothing created something would make the effect greater than the cause, a contradiction to science. An effect cannot be greater than its cause (if there’s only one cause) or the sum of its causes (if there exists more than one cause). The universe requires a supernatural intelligent Cause and Creator – God.

Babu G. Ranganathan, has his bachelor’s degree with concentrations in theology and biology and has been recognized for his writings on religion and science in the 24th edition of Marquis ”Who’s Who In The East.”

The author’s articles may be accessed at religionscience.com